Welcome!
Close
Would you like to make this site your homepage? It's fast and easy...
Yes, Please make this my home page!
No Thanks
Don't show this to me again.
Close

Cernunnos: The Horned One


At the dawn of pre-history, it is said, humanity worshiped a Goddess who often co-existed with a male Deity, sometimes depicted with horns. Such figures represent humanity's elemental search for survival and meaning in mortality, a relentless quest for unity with the divine and the interdependent nature of the existential web. 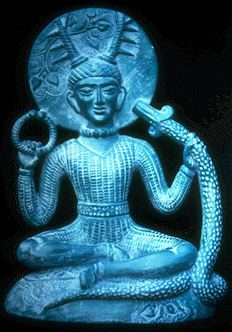 The present text is intended to introduce students unfamiliar with the concept of the Horned God to an archetype which repeats itself in many ancient religions. Though later demonized by conquering Christian invaders from Rome and elsewhere, among the indigenous peoples of the European mainland, Britain and Ireland, the Horned God personified a manly affinity with the animal kingdom. His relevance in today's society is also increasingly being recognized.

One of the earliest representations of a Horned God in a purely Celtic context, according to Morning Glory Zell (1991), is a rock carving from Val Camonica in northern Italy. The God is portrayed standing upright wearing a long garment and carrying a torc, the collar-shaped necklace of divine authority. As is common, he is accompanied by a horned serpent and a male worshiper. These symbols foreshadow a combination of identifying features--antlers, torc, horned serpent and other animals--recognizable in later period artwork. Subsequent images often show the Horned God seated in a half-lotus position familiar to yogis.

The name Cernunnos has come down to us through a stone relief carving from the Gallo-Roman period which was unearthed in Paris of a God with antlers, upon each of which hangs a torc. In the collection of the Cluny Museum in Paris, the stone bears the clearly legible inscription CERNUNNOS in Roman letters above the God's face. But it would be a mistake to identify all horned gods as Cernunnos, or even all stag-antlered ones.

Cernunnos is the most common name used today for the deity called "Uindos" in Old Irish literature. He is also sometimes called "Finn," the name of a main hero in a cycle of ancient stories about the "Fianna" or warrior-bands of Old Ireland.

Undoubtedly the most famous image believed to represent Cernunnos is from an inner plate of a priceless silver-plated copper cauldron unearthed in the spring of 1891 in a Danish peat-bog near the hamlet of Gundestrup in Northern Jutland. Cauldrons or chalices (also called grails) were often used in ancient Pagan religious rites, symbolic of the cauldron of the goddess Cerridwen, the so-called cauldron of rebirth. But the Gundestrup cauldron was obviously very special. After more than a century of debate, scholars seem to have reached consensus in dating its manufacture to the late Iron Age -- the second or first century BCE.

Vividly decorating the cauldron's plates are scenes of war and sacrifice, bearded deities wrestling ferocious beasts, a bare-breasted goddess standing flanked by elephants, and a commanding figure with stag's antlers brandishing a ram-headed snake in one hand and a twisted neck collar or torc in the other. Most scholars agree this figure is Cernunnos.

In their "lectures on Irish magick, cosmology and poetry," Darkstar & Bwca (1992) question whether the antlered deity on the cauldron plate is really Cernunnos at all. They offer the following observations:

"The figures on the Gundestrup cauldron, there are Goddess figures and there are God figures. The Goddess figures all have little teeny-weeny bumpy breasts hanging out on the front, and most of them have braids or other long hair. The God figures uniformly have beards. The antlered figure has neither of these characteristics, and so would apparently be an androgynous figure, something in between, the liminal state. Here is a person who is deliberately putting themselves into that in between state. They're in between genders, which is another one of those important turning points, magickally speaking" (p. 26).

This theory is in stark contrast to Morning Glory Zell's deeply evocative, sensual and unequivocally male version of the illustration first published in 1983 in The Green Egg magazine and later by Rowan (1987) in his excellent book The Horned God.

Present space will not permit extensive discussion of the religious beliefs of the culture which brought the Gundestrup cauldron into existence. Additional readings are recommended at the conclusion of this article for those who are interested. But in prehistoric Pagan societies, particularly that of the Celts, it is now understood that ethnicity, gender and mythology were much more complex than previously supposed. Firm cultural boundaries may not have existed, humanity and its gods seem to have been viewed as having more than simply male and female genders, and religious beliefs were flexible and multi-faceted. Applying such concepts in modern life has profound implications.

To illustrate the permeability of cultural boundaries, the ancient Celts appear to have been influenced by traditions from as far away as India, as evidenced by the position of th legs of the antlered god depicted on the Gundestrup cauldron and elsewhere. Students of ancient religions have commented on the similarity of Cernunnos as depicted on the cauldron and a prototypical image of Shiva Pashupati, from a Mohenjadaro seal impression dated around 1500 BCE.

Cernunnos is understood as a complex and powerful god, though he may not have been the head of the Celtic pantheon. Since his earliest origins as Lord of Hunt, he has been associated with animals, abundance, good fortune and virile fertility. But since the object of the hunt is the death of the prey, and the hunter is sometimes even killed in this life-sustaining pursuit, Cernunnos is recognized as both the God of Death and guardian of the underworld. In this sense, as well as being a giver of earthly riches, Cernunnos could perhaps be compared to the Plutos (though it is more often Pan, god of music, who is generally pictured in Greek art as having horns).

Irish stories describe Cernunnos (Uindos) as the son of the high god Lugh. He is called a wild hunter, a warrior, and a poet. Similarities between the Celtic and Germanic pantheons explain why the Romans identified both Lugh and Wodan with Mercury (Hermes). Lugh and Odin share many attributes, suggesting a common mythological descent. Analysis of Cernunnos shows some of the same traits and symbols in common with the patron God of physicians, healers and magicians. The Greeks called Hermes Psychopomp (conductor of souls), the very same title given to the Lord of Death (whom the Celts recognized as Cernunnos) in his union with the Lady of Life.

Though no known ancient examples have been uncovered where Cernunnos is clearly depicted with a consort, he is portrayed in the company of many Goddesses on the Gundestrup cauldron. This fits with is generally known about social relations between the sexes among ancient Celts, as well as aspects of that which has been reconstructed of Druid religion.

In our present age, various representations of the Horned God as a gentle, masculine figure strike a resonant chords for many in the neo-Pagan movement. Some Wiccan alters provide a place of reverence for his noble visage alongside a worthy representation of a manifestation of an ancient Goddess. Meditation on such images, research and study of the old ways, and other Pagan spiritual practices provide meaning and depth to growing numbers of Americans today.

© 1994, Hawthorn Grove, Inc. Copying or quoting from this article is permitted, provided credit is given, a hard copy of any printed republication is provided to us, or you link to this page on the web. Please let us know if you are linking to this page, so we can link to yours. Acknowledgement is given to the sources of linked inline images on this page. Click on such images to visit those pages. Thanks.